Father Lankester Merrin (novel: c. 1892–1971; film: c. 1896–1975) is a fictional character in the novel The Exorcist, its film adaptation, The Exorcist, and several sequel films. Merrin is a priest and exorcist who had several encounters with the demon Pazuzu and eventually became the one it assumedly feared. Alongside Father Karras, Merrin attempted to save the soul of Regan MacNeil, a young girl possessed by Pazuzu.

Merrin was born in the Netherlands, the son of a Dutch father and an English mother. As an elderly priest on an archeological dig in Iraq, he finds images of the demon Pazuzu and subsequently experiences other unusual phenomena. He had previously faced the demon many years ago during an exorcism in Africa. The find sparks a premonition that he will battle the demon again in a distant land. Merrin does not appear again until much later in the novel, when he joins the protagonist, Father Damien Karras, in Washington, D.C. to exorcise the demon from the body of a young girl. Merrin, who has a heart condition for which he takes nitroglycerin, dies during the ritual, leaving the inexperienced Karras to complete the exorcism himself.

Father Merrin belonged to a group of theologians who believed that psychic powers were a spiritual gift which would one day be shared by all humanity in a kind of global consciousness, and thought people like Kokumo and Regan were foreshadowers of this new type of humanity. 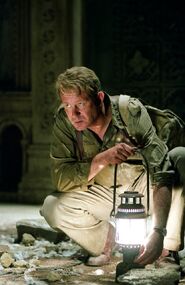 Merrin arrives at the MacNeil house.

Add a photo to this gallery
Retrieved from "https://exorcist.fandom.com/wiki/Lankester_Merrin?oldid=6046"
Community content is available under CC-BY-SA unless otherwise noted.