Pazuzu is the main antagonist and demon of The Exorcist horror novels and film series, created by William Peter Blatty. Blatty derived the character from Assyrian and Babylonian mythology, where Pazuzu was considered the king of the demons of the wind, and the son of the god Hanbi. In The Exorcist Pazuzu appears as a demon who possesses Regan MacNeil.

Pazuzu is often depicted as a combination of animal and human parts with its right hand pointing upwards and its left hand downwards. It has the body of a man, the head of a lion or dog, eagle-like taloned feet, two pairs of wings, a scorpion's tail, and a serpentine penis.

Pazuzu first appeared in William Peter Blatty's The Exorcist in 1971. The novel is about a 12-year-old girl, Regan MacNeil, possessed by a demon. The demon is later revealed to be Pazuzu; though never explicitly stated to be the demon, two references were made about his statue, which was uncovered in the prologue by Father Lankester Merrin in northern Iraq. After Regan's mother worries about her daughter being possessed, Merrin and Karras arrive at her house and perform an exorcism on Regan and successfully force the demon out of Regan's body. In their struggle to free Regan from the thrall of Pazuzu, both priests perish (Merrin dies of a heart attack and Karras sacrifices himself to save Regan).

Pazuzu returns in Legion, wanting to take revenge for being thrown out of Regan's body. He does this by driving the Gemini Killer's soul into Father Damien Karras's dead body. Although not directly identified as Pazuzu, the Gemini Killer refers to "others" who would see his work continue. In the end of the novel, the Gemini Killer leaves the body of Father Karras when Kinderman accepts that he is in fact the Gemini Killer, satisfied that his work has been recognized and his past avenged.

Two years after the novel was published, The Exorcist was released in theaters as a motion picture. In the beginning of the film, Father Merrin finds a ruined statue of the demon during a dig in Iraq. The majority of the film deals with Regan's demonic possession by a being she initially refers to as "Captain Howdy." The demon is ultimately exorcised out of Regan's body after Merrin dies of a heart attack, and Father Karras sacrifices himself by luring the demon into his body and then hurling himself through a window and down the infamous flight of stairs leading down to M Street NW, in Georgetown.

In Exorcist II: The Heretic, Pazuzu is named as the demon and returns to haunt Regan. There are flashbacks of Merrin battling the demon in Regan and also flashbacks of Merrin's exorcism of Pazuzu from a boy named Kokumo in Africa many years earlier. In the end of the film, Regan and Father Lamont, who has been trying to help her, but has become possessed by Pazuzu, return to Georgetown. After a struggle, he declines Pazuzu's offer of power and Regan banishes Pazuzu, appearing in the form of locusts.

The Exorcist III takes place 15 years after the original film. The film was adapted by Blatty from his own novel. Lieutenant Kinderman, who was also in the original film, has been on a murder case about mysterious deaths committed by an anonymous person. It is later found out that Pazuzu convinced the Gemini Killer, who died at the same time as Father Karras, to inhabit his body as punishment for saving Regan. However, as result of his suicide, his brain was severely damaged, which demons/spirits need when they possess a body. The Gemini Killer spent years stimulating his brain so he would be of use, and then began committing murders by possessing the bodies of the other inhabitants of the hospital where Karras had been staying. In the end of the movie after a turbulent exorcism is done, Karras regains control of the body and asks Kinderman to kill him, which he does by shooting him in the head, keeping him from being possessed again.

In Exorcist: The Beginning and Dominion: Prequel to The Exorcist (two different prequels of The Exorcist), Pazuzu is shown in his first encounter with Father Merrin in Africa in the duel that "nearly kills Merrin," referenced in the very first movie. Although the plot of both of these versions center around Merrin's African exorcism many years earlier, they take a sharp departure from the original scenes in The Heretic where Merrin exorcises a young boy named Kokumo on a mountaintop. No effort was made to keep the stories consistent beyond that central idea.

William Peter Blatty's creations of Pazuzu and The Exorcist were based on a heavily reported series of 1949 events in St. Louis, Missouri concerning the possession of a 14-year-old known as "Robbie Mannheim" (or sometimes "Roland Doe"). Blatty, who was a student at Georgetown University, read about the story in Washington, D.C. newspapers and created The Exorcist twenty years later.

In the first film, Linda Blair played Regan. Mercedes McCambridge provided the majority of Pazuzu's dialogue, most notably in all the scenes with Fathers Karras and Merrin. Prior to that, Pazuzu's voice is provided by Linda Blair herself in some scenes, and Ron Faber in others.

Pazuzu is mostly manifested by a swarm of locusts in Exorcist II: The Heretic, though is also shown possessing the young Regan and a young boy named Kokumo during flashback sequences. While the stand-in for the young Regan is uncredited, the possessed Kokumo was played by Joey Green, and all of Pazuzu's dialogue in the film is provided by Karen Knapp.

The Exorcist III is the only film in which Pazuzu does not have a physical manifestation, though it still does have a few lines of dialogue, which are voiced by Colleen Dewhurst.

In The Beginning and Dominion, the victims possessed by Pazuzu are played by Izabella Scorupco and Billy Crawford respectively, and the voices of Pazuzu are Rupert Degas in the former film and Mary Beth Hurt in the latter.

There are several scenes in which the viewer can see the face of Pazuzu flashing quickly on the screen in The Exorcist. In his "true form", Pazuzu resembles a rather heavy, gaunt-white face with dark rings around his dull, red eyes and brown, crooked, rotting teeth. In this form, the demon is played by actress Eileen Dietz, who underwent makeup tests for the "possessed Regan", wore one of the alternate make-ups in her role as the demon.

In Assyrian and Babylonian mythology, Pazuzu (sometimes Fazuzu or Pazuza) was the king of the demons of the wind, and son of the god Hanbi. He also represented the southwestern wind, the bearer of storms and drought. Pazuzu is the demon of the southwest wind known for bringing famine during dry seasons, and locusts during rainy seasons. Pazuzu was said to be invoked in amulets, which combat the powers of his rival, the malicious goddess Lamashtu, who was believed to cause harm to mother and child during childbirth. Although Pazuzu is, himself, an evil spirit, he drives away other evil spirits, therefore protecting humans against plagues and misfortunes. (In the film, when the Iraqi museum curator sees Merrin looking at the amulet, he says, "Evil against evil".)

Wilfred Lambert (1968) identified a fibula with a Pazuzu head at Tel Megiddo, and also a Sumerian-Akkadian invocation.

Merrin and the Pazuzu statue.

The demon takes over Damien Karras. 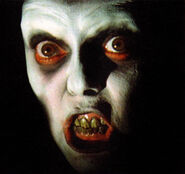 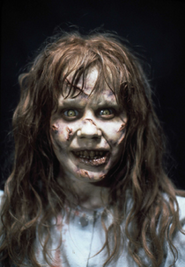 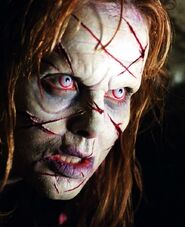 An apparition of the statue as Pazuzu agonizes.
Add a photo to this gallery
Retrieved from "https://exorcist.fandom.com/wiki/Pazuzu?oldid=6827"
Community content is available under CC-BY-SA unless otherwise noted.