Regan Teresa MacNeil is a character from the novel The Exorcist, its film adaptations, and The Exorcist television series. In the 2014 BBC Radio 4 adaptation of the novel, she was played by Lydia Wilson. Regan is the daughter of famous actress Chris MacNeil, a shy, creative young girl who is taken by the demon Pazuzu and gradually assumes a strange, agressive and completelly different behaviour which worries and scares her mother, forcing Chris to consult an exorcist.

Regan became an icon of horror films and a primary influence for subsequent films depicting demonic possession. The character has being spoofed in many parodies (in one occasion by Linda Blair herself), such as the Scary Movie series.

Regan MacNeil is a 12-year-old girl and the daughter of actress Chris MacNeil. Regan is caught between her mother's grueling working schedule and the fact that her parents are in the process of an acrimonious divorce (her father is in Europe and is not seen in the movie).

In the sequel Exorcist II: The Heretic, which takes place four years after the events in The Exorcist, Regan is 16 years old, living in New York City and undergoing psychiatric therapy, claiming to remember nothing about her plight in Washington, D.C. while her psychiatrist believes her memories are only buried or repressed. As the story progresses, Regan is revealed to have psychic healing powers (the reason why the demon attacked her previously).

Pazuzu first manifests himself from inside Regan. 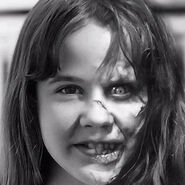 Add a photo to this gallery

Retrieved from "https://exorcist.fandom.com/wiki/Regan_MacNeil?oldid=5898"
Community content is available under CC-BY-SA unless otherwise noted.