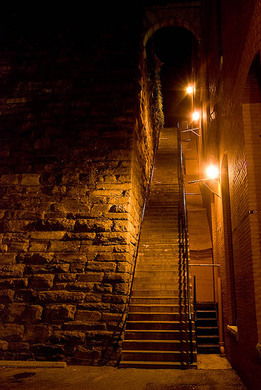 The following article is taken from Wikipedia. All the rights excluding the last line, are owned by Wikipedia.

The Exorcist steps, located in Georgetown, Washington, D.C., are famous for being featured in the film The Exorcist. The stone steps at the corner of Prospect St NW and 36th St NW leading down to M Street NW in Georgetown were built in 1895 during construction of the adjacent Capital Traction Company car barn.

For The Exorcist, the steps were padded with 1/2"-thick rubber to film the death of the character Father Karras. Because the house from which Karras falls was set back slightly from the steps, the film crew constructed an extension with a false front to the house in order to film the scene.

The stuntman tumbled down the stairs twice. Georgetown University students charged people around $5 each to watch the stunt from the rooftops.

In a ceremony Halloween weekend 2015 that featured the film's director William Friedkin and screenwriter William Peter Blatty (who also wrote the book on which the film is based), the Exorcist Steps were recognized as a D.C. landmark and official tourist attraction by Mayor of the District of Columbia Muriel Bowser, with a plaque unveiled at the base of the steps recognizing its importance to D.C. and film history. The death of Burke Dennings also took place on the stairs but the scene wasn't filmed but was a central part of the movie.

Community content is available under CC-BY-SA unless otherwise noted.
Advertisement